A Real Church of Martial Arts!

Great Day in Paradise!
Monkeyland may be as little as two weeks away.
Man,
that’s worth a dozen work outs!
So here is the URL so you can take a look at this gem in the wilderness.

Give the page time to load,
there’s a couple of large pictures.
And make sure you hit the FB LIKE button at the top of the page! 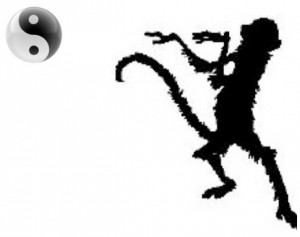 The Church of Martial Arts!

First, I wrote a book,
and it is called Monkeyland,
and the tagline is…
‘Another word for Freedom!’

It is a story of war and corruption and disaster and man’s inhumanity to man.
Yet,
after five books,
there is a sublime message,
one that forgives the thought of war
if we can only understand ourselves,
transform ourselves…
mankind has hope.

And,
I kept working out,
developing matrixing,
nibbling into Neutronics,
and I started thinking about a real Monkeyland.

And I used to sit and wonder,
How the heck was I supposed to pull this off?
How could I make this happen?
And I mentioned Monkeyland in the newsletter.

Frank was one of the first people I ever taught matrixing to.
Back about 1984 we locked ourselves in the dojo
and worked out until he was a black belt.
Frank read the newsletter,
and he had his own bad case of good dreams.
He wanted a place where, among other things,
he could escape the grind of a society going bad,
where GMO could be defeated,
where solid stock, animal and human both,
could be raised.
And our dreams were going in the same direction.

It took a couple of years, some very intense negotiating,
a bunch of hoops to jump through,
but within a couple of weeks we will be on the land.
Monkeyland.
A ranch free from the contaminations of society.
A Church where people can be encouraged to plumb their depths,
find the true art that is within themselves,
is their inherent nature,
just waiting to come to the surface.

Of course,
there is going to be an immense amount of work,
but,
we are in the right time,
and the right place.

Did you know that people actually love to work?
The country only gets depressed when people aren’t working.

Did you know that people love to solve problems?
With a government telling them no,
with a society of political correctness,
where you have to ask permission to pee in ocean,
people are miserable.

But set them free,
tell them to build something,
tell them that nobody is going to stop them,
and you have paradise each and every single day.

What better gift to the best on earth
than to give them a place where they can let loose their talents,
change the path of mankind,
elevate ALL martial arts!

So,
more to come,
I’ll probably have to set aside a separate section of the newsletter
just to deal with the happenings at Monkeyland.

But,
remember this…
if you are a true martial artist,
if you want to find the truth of yourself,
and if you are willing to work your fingers to the bone,
then you have a bed up here.

Within the month I should have some sort of plans started
to enable visits and instruction and even some possible live in arrangements.

If you can do your Matrix Karate,
right out of the box,
then we won’t have to spend time teaching you things you should already know,
and we can get right into the deeper teachings.

So here’s the URL for Matrix Karate…
http://monstermartialarts.com/martial-arts/matrix-karate/

And in a future newsletter
I’ll lay out the complete sequence of study.
But for now,
remember,
it all starts with Matrixing.
Matrixing led me to Monkeyland,
and it’s going to bring you here, too.

Now,
thanks to all,
and special thanks to Frank,
and I’ll be talking to you later.
Have a great work out!