Advice to Martial Artists from a Mugger

Advice from a Mugger!

Okay. I’m a mugger! Got to earn a living, and I usually earn it on shmucks like you. I simply come up behind you and conk you with a baseball bat and take all your money while you’re tossin’ the ball in snoozeville.

My favorite tool is a knife. A sword ain’t bad, but the man in blue might arrest me if he sees me with one. Heck, he might even shoot me!
Don‘t want that, man.
So I like a knife. You sneak up, stick the blade up against the throat, and whisper, and the fool fills his pants and empties his wallet at the same time!
Hah! 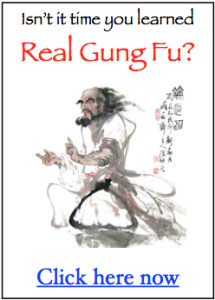 Anyway, one thing I hate is people who scream.
I mean, can’t a guy get a little peace and quiet on the job? Can’t ya just dry up and give me your wallet? Why do you have to make all that noise? Don’t you know it tends to draw a crowd? And I don’t want no crowd around me when I work. Ya know?

And, talkin’ about it, I also don’t want nobody throwin’ stuff at me.
Ya know, I had a guy the other day threw a bunch of pennies, right out of his pocket, fer Chrissake, threw some pennies at me and yelled! Scared me half to death, and one of those pennies actually hit me in the eye! Man, I was runnin’ and cryin’ all at the same time, and, let me tell you, it didn’t feel good!
So knock that crap off! No throwin’ stuff or makin’ a bunch of noise.
I mean, gimme a break, eh?

But the worst thing ever is when I’m tryin’ to mug somebody, and he has a knife hisself!
I mean, if a guy like that sees me coming, and he’s got a knife in a slick, little holster under his jacket flap, or something like that, he might get it out and actually stick me! Can you believe the nerve of the guy?
And what would the other muggers think if it was a …(choke)… a girl that stuck me!? Man, the shame!
I mean, lay off on that fightin’ back stuff. I just want your money, I don’t want no trip to the bone factory!

So there ya go, just a couple of things that tick me off, and that I don’t want you doing. Keep ‘em in mind cause it’ll help me do my job. Keeps me off welfare, ya know?

About the author: Al Case is the webmaster at MonsterMartialArts.com. Check out his Blinding Steel Course, the fastest and most efficient way to stick a mugger in the world!