New Training Manual on Bruce Lee and Jeet Kune Do

The name of the book is ‘Bruce Lee, Jeet Kune Do, and Neutronics.’

Written by Al Case, a martial artist with near fifty years experience in the martial arts, this book takes an outside viewpoint of Bruce Lee, and his martial art (Jeet Kune Do). 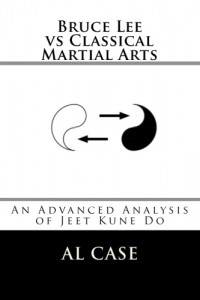 Bruce Lee is often considered, specifically as to what drove him to his martial arts theories. The main focus of the book, however, is to compare and contrast Jeet Kune Do to the more classical martial arts, specifically, the author’s art of Karate.

This is a hard core book. While it is respectful, it is obvious that the author holds Mr. Lee in high esteem, there are some very hard questions asked concerning the formation of JKD, and the real purpose of the art.

It is also an intelligent book, going into Matrixing Technology, which is the first and only science of the martial arts, and Neutronic philosophy. The author claims that because JKD is an advanced martial art only advanced methods of thought can be used to analyze it.

Which is to say that if you are Beeavis or Butthead, you may want to avoid this tome. It won’t teach you Jeet Kune Do, and it may hurt your head to actually start thinking about it.

Mr. Case has, as said, near 50 years martial arts experience. He began Kenpo Karate in 1967, quickly became an instructor, and went on to study virtually every martial art that came down the pike during the Golden Age of Martial Arts. He became a writer for the magazines in 1981, and had his own column in Inside Karate. Thus, Mr. Case doesn’t enter the picture as a newbie, but an experienced fighter and writer. His compare and contrast with JKD should provide the most enlightened student with much thought.

Bruce Lee, Jeet Kune Do, and Neutronics, will be released and on Amazon within the week, and students interested in the paperback version should do a search on Amazon probably by the last week of April 2015.

Students who would like to save $5 and purchase the instant download of the book should go to FreeBruceLee.com.