Ronda Rousey and Miesha Tate Hate Each Other!

Actually Ronda Rousey and Miesha Tate hating each other is old news. The two rivals have been at each others throats, literally, ever since women’s fighting at the UFC went big time.

Ronda Rousey, as everybody body a chicken farmer in the antarctic knows, is the gal who wins every match with an armbar. Got a mother who Judo-ed, and she judo-ed, and then she went into the fight game because it was a way to flaunt her charming personality. 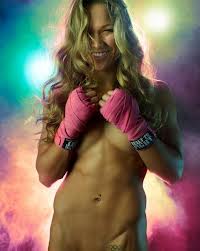 Ronda packs more than a punch!

Word has it that she pins by armbar because she is afraid of what is going to happen if she actually ever hits anybody. A humanitarian thing, you see.

Miesha Tate, a rough and tumble gal from the old school, is the girl Ronda armbarred back in 2012. Oops.

So it’s no wonder that these two titans of hair curling matches share no love.

The latest forum for their spit and claws is the training camp for UFC 18. That’s right, the Ultimate Fighting Championships…The House!

UFC President Dana White thought it would be fun to have girls coach the thing, so he enlisted Rabid ronda Rousey and Cruel Cat Zingano to be the coaches. Well, actually, Ronda was a shoe in, but Cruel Cat had to beat Malicious Miesha for the honor of coaching against the world ladies champ of twist and pound, Ronda (she ain’t no mousey) Rousey.

So, the stage is set, and the two gals are hiss and fizz POed at each other. Each and every week they trade barbs and insults, and dream about the day they will get to straighten each others curls in the Octagon.

And that day is coming right durned soon!

Dana White has compared the fun and frolics to the now famous season of Tito Ortiz and Chuck Lidell. And he has said of the girls “It’s pure F***ing mayhem every day!”

Well, mayhem is this writer’s meat and potatoes, and he will be following the season avidly and waiting fervently for the season ending match!

Ronda Rousey and Miesha Tate, a match made in cat heaven.

Here’s a great article for gals who want to takedown the biggest guys! It’s from the website Puncher Harder Now!