Bruce Lee Fighting Jackie Chan is a Match Made in Heaven!

Bruce Lee Fighting Jackie Chan is the Quintessential match up, and one has to wonder who would win…Bruce Lee or Jackie Chan. These guys were the ultimate top of the martial arts, die hard fanatical kung fu adepts. And, yes.  I know, Bruce Lee is dead, but what most people don’t know is that they were actually in one movie together, which would have put them at relative ages for a beat down. 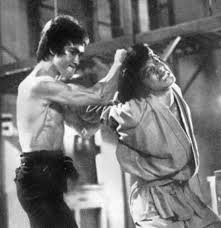 The name of the movie, for those who are interested, and which had a LOT of Bruce Lee Fighting Scenes, is Enter the Dragon. I had heard that Jackie was one of the nameless monks when Bruce does his flip in the beginning of the movie. And he may have been. But where he is really obvious is during the prison break scene. He is the guard with the mustache. Go on, watch it. A fascinating piece of kung fu cinema history.

Anyway, on Bruce Lee’s side, we have a person who honed himself to physical perfection, who studied the philosophy of the martial arts, who invented his own fighting system.

On Jackie Chan’s side we have a person who went through the Peking Opera. Incredibly tough work outs every day, and mastered multiple styles of Kung Fu.

Now, to contrast these two marvelous martial artists…Bruce knew Wing Chun Gung Fu, but he didn’t master it. Yes, he studied many martial arts, but he comes out behind Jackie Chan in this one.

In fighting, however, the little dragon has it over ‘Big Nose.’  Bruce’s willingness to fight is legendary. From rooftop contests to back alley brawls, Bruce fought any and all; to Bruce Lee real fighting was his bread and butter.  Even during filming of his movies, when he obviously could have stood back and played the star, he preferred to meet any who doubted and make believers out of them.

In the face of this awesome fighting talent Jackie might take second place, except for one thing. In spite of the Little Dragon’s incredible physique, Jackie was actually better at stunts, and, let’s face it, he could take immense amounts of damage and keep going. The outtakes of his movies show him breaking literally every bone in his body, and yet he kept going. Broken leg? Cast it up and jump from a dock to a moving boat. Skull fracture so bad you could see the grey matter? Back on the set in two days.

So, what do you think? Would Bruce Lee Fighting Jackie Chan be the only answer to this fascinating question?

4 Responses to Bruce Lee Fighting Jackie Chan ~ Who Would Win?