Bruce Lee Fights to the Death!

Bruce Lee fights anyone, it is true, but, Not to be disrespectful, it is obvious after all, but both Bruce Lee and Michael Jackson happen to be dead. Finis. Gone.

And, the burning question left in their wake, which one of these superstars had more impact on the world. It doesn’t matter that they were in different areas, they can still be compared. So, here we go. 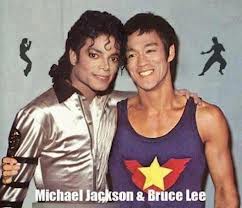 When it comes to acting, Bruce Lee wins. Heck, MJ didn’t make much in the way of movies, so he gets a big zero. Bruce, on the other hand made several movies, and they are still avidly watched to this day.

When it comes to who was the better singer, we have an interesting dilemma, but Bruce Lee fights to victory again! The dilemma is that while Bruce didn’t make any songs, his vocals are still having more impact than the Gloved One. When the mugger jumps out of the alley, are you going to call him a PYT, or give him a woop woop that will chill him to the bone and remind him that there are people in this world who can kick some serious ass!

When it comes down to the all important question of moves, Bruce Lee still has the edge. Michael may have been able to walk backwards funny, but he couldn’t do the splits or kick somebody’s adam’s apple or anything worthwhile. And, quite honestly, I think Bruce could have moonwalked like a sucker, but I don’t think Michael could kick Chuck’s ass.

Now, downright sheer impact, and…Bruce Lee Fights to a win again. Michael encouraged a generation of young, impressionable minds to walk funny backwards, uh, walk backwards funny, uh, you know. Bruce, on the other hand, encouraged several generations, and is still going strong, as to the value of being able to protect yourself, the value of healthy living, living an artistic lifestyle, and on and on and on.

Who had more presence, I think it is obvious that Bruce wins, once again, and bigger time than ever. Michael filled a stage, and an occasional boombox, but he never said a line like…you have offended my family, you have offended Shaolin. Really, not to be disrespectful, but, except for words from a few songs that are hard to understand, can anybody remember anything that Michael said?

So Bruce Lee would have kicked Michael Jackson’s ass, big time, in life, and now even in death. Oh, you don’t like it, you think I rigged the results worse than a Michael Jackson trial? Well, you better walk backwards funny away from me and say your piece so I can’t hear it, because, my friend, I study Bruce Lee.

A bit of humor, for which I received hate mail. Lord, people hated this article. But I think they were all named Beavis and Butthead. Truth of the matter is that it is a good headline, was fun, and was not meant to be disrespectful at all. Heck, I had fun with this Bruce Lee Fights piece!