The Difference Between Wing Chun and Karate

Wing Chun, of course, is the Chinese Martial Art that has soft blocks, which is to say guiding blocks, and hard strikes. It has been around for hundreds of years, and it is quite sophisticated. A person who has actually reached the ‘inner circle’ of this Chinese Martial Art is quite untouchable, can fight blindfolded, has a full range of sixth senses having to do with anticipating attacks before they happen, and so forth. 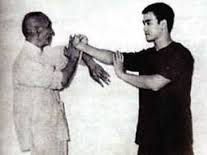 Karate, though it is the new kid on the block in many ways, has also become fairly sophisticated. It was derived from a number of sources, many of which were Chinese, and driven to a high degree of workability by the ‘Code of the Samurai.’ It too, when you can find a good school, results in some very profound and sixth sense abilities.

The main difference here is the direction of the blocks.

Wing Chun blocks tend to come back towards the body.

In Karate blocks tend to go away from the body.

In either art, if you are moving the block sideways, you are doing the block wrong, for there is no body, and therefore no possible body alignment behind the block.

Now, that all said, take a look at ‘Wing Chun Kung Fu,’ by James Yimm Lee, and you will find a section on the eight gates and four doors. Is this not perfectly transferable to Karate?

Thus, these styles of Japanese Martial Art and Chinese Martial Art do have more than surface similarities, and it is even of high benefit to study both systems. You must not try to blend them however, past what I have said here. That would muddle either art, cause confusion, and detract from both Wing Chun and Karate.

If you wish to go further with the concepts outlined in this article on Wing Chun and Karate you should examine Matrixing at MonsterMartialArts.com, a specific course that would apply would be the Master Instructor Course.